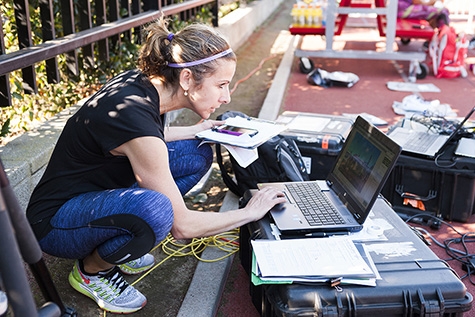 Leslie Barnes, Ph.D., spends her time researching and analyzing footwear to lay the foundation, grounded in science, to help Nike designers make athletes jump higher, run faster and endure longer. Working with athletes in the lab, during practices and on the field, she transforms their performance data into insights which contribute to the design of the perfect version of a shoe that ultimately ends up on the track in the Olympics.

Barnes graduated from the University of Florida College of Public Health and Health Professions with a doctorate in rehabilitation science in 2013. She said the rehabilitation science program prepared her for her unique career as a physical therapist and clinical biomechanist in the Nike Sports Research Lab at Nike World Headquarters in Beaverton, Oregon.

Through the interdisciplinary nature of the doctoral program, Barnes said she learned how to collaborate with experts in various health professions. She applies the experience she gained through research and interdisciplinary projects at UF to her work with world-class designers, material science engineers and knit engineer specialists.

Since the Rio Olympics in 2016, Barnes said her team at Nike has been working hard on prototypes for the Tokyo summer Olympics. Her job entails a lot of trial and error, but she said that it is nothing to fear.

“Don’t be afraid to fail early, so you have time to fix it,” Barnes said.

She explained that the work on a specific product takes a long time and includes many alterations. By the time professional athletes wear the shoes in competition the shoe has gone through several iterations.

“The proudest moment I have was watching the Rio Olympics and watching athletes that I spent three years working with win gold. Knowing that I had a part in the science behind the footwear designs — the product that was on their feet — that is my proudest achievement.”

Barnes said she hopes to eventually become a mentor to young scientists who also choose to pursue non-traditional careers.

“I want to mentor and train young scientists. To help them develop and grow into amazing people who are solving new problems and breaking barriers in innovation and discoveries,” Barnes said.