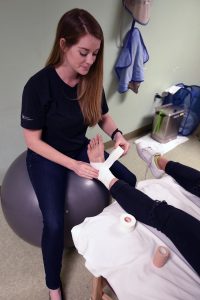 Cecilee Fleming, D.P.T., spent Christmas in Washington D.C., Independence Day in Boston and many other holidays all across the nation. For the last four years, Fleming has been able to merge her passion for the performing arts, health care and travel as a touring physical therapist who treats performers in national productions of Broadway hits.

“I get to help other people live out their dreams, while I live out mine,” said Fleming, who graduated from the college with both a bachelor’s degree in health science in 2011 and a doctorate in physical therapy in 2014.

Fleming herself trained as a competitive dancer and singer for 15 years. As a child, she dreamed of performing on Broadway, and now she has the chance to contribute to the performing arts world from behind the scenes.

“Every night I get to hear the show overhead, or I get to see it from the audience. It always feels special to me and I feel lucky to be a part of it all,” Fleming said.

Currently, Fleming is working with members of a popular Broadway musical that is touring all over the U.S. In her role, she helps performers in physically demanding roles maintain their health, particularly those who wear asymmetrical costumes or portray highly active characters, such as monkeys. 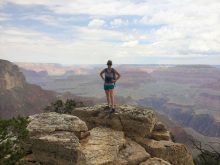 The tour stays in one city between two to seven weeks, depending on the size of the city. Since the show starts in the early evening, Fleming is able to explore her new destinations in the morning prior to heading to work. As she arrives in a new city, Fleming makes a checklist of all the things she wants to see. Typically, she said she is able to complete her entire list of adventures before it’s time to embark on a new journey.

“It’s enough time to be in the cities to absorb all the excitement and leave before you are bored. How else would I get to travel to all these cities and explore them?” Fleming said.